As we get ready for the 2022 ECS conference this April, we'd like to introduce you to our keynote speakers!

Dr. Mia Roditi-Elasar has been studying marine mammals’ resident along the Israeli coasts for the past 30 years, focusing on their ecology and ecotoxicology.  She is a research fellow at the Leon Recanati Institute for Maritime Studies, the Leon Charney School for Marine sciences of the University of Haifa and a co-founder of ‘Delphis’ association.  Currently coordinating mortality and pollutants data collection from stranded & by-caught cetaceans and conducting photo-ID surveys on the northern dolphin populations off the Israeli Mediterranean coast. Lately, leading the IUCN's 'Monk seal protection in the Eastern Mediterranean' project in Israel. Her keynote speech will summarize the information collected from the southeastern Mediterranean coast and will address its contribution, or lack thereof, to regional marine mammals' conservation. 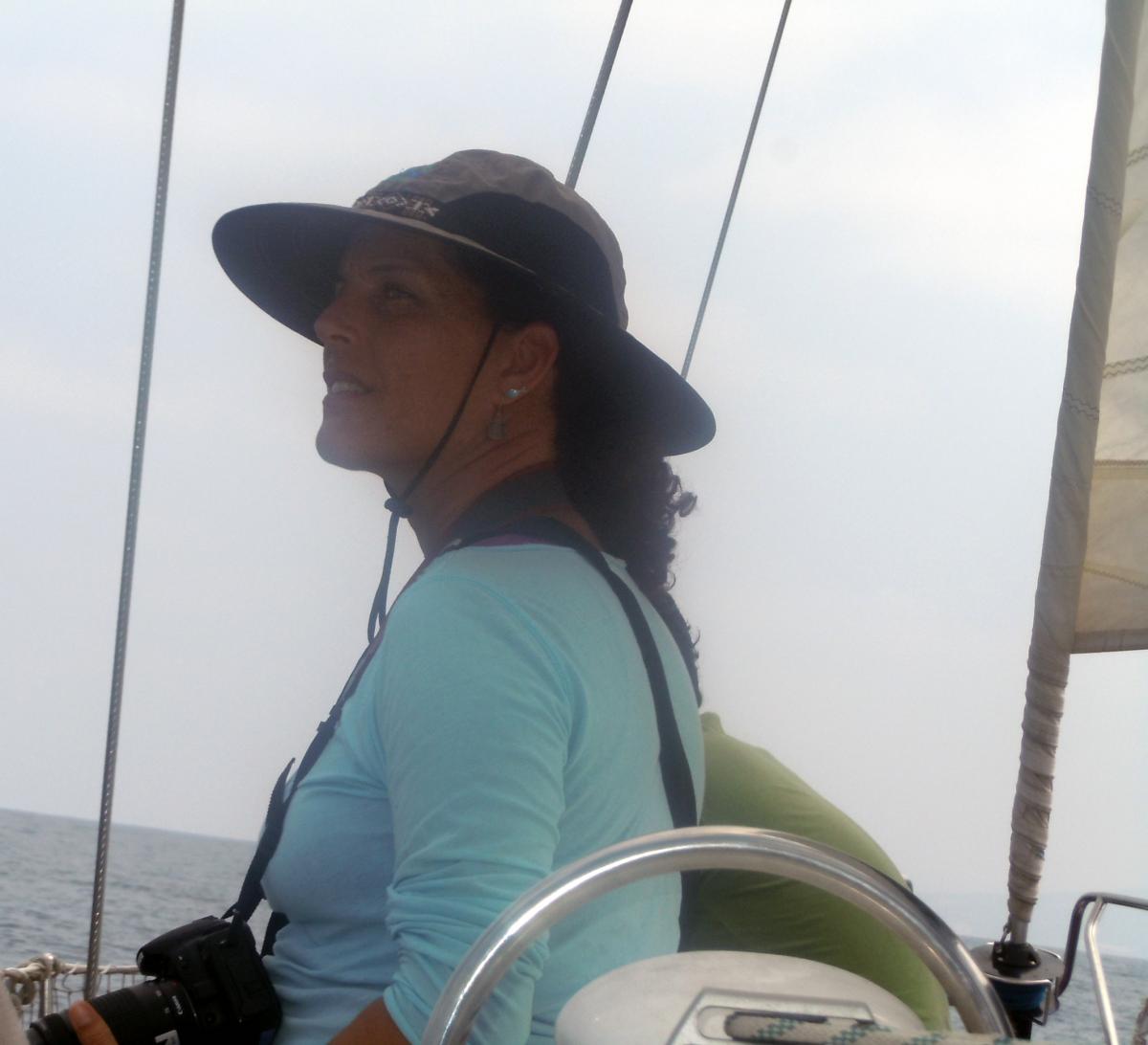 Marine mammals’ conservation in the Eastern Mediterranean - Are we on the right path?

Despite its extreme oligotrophy, the Levant Basin hosts an impressive list of top predators, including cetaceans, pinnipeds, sharks and tunas.  The resident cetacean species are represented by small and seemingly stable populations, the future of which heavily depends on minimizing anthropogenic threats. An ongoing marine mammal research has been taking place along the Israeli coast for the past 30 years, as will be detailed and summarized in my talk. Of the two resident coastal cetaceans, resighted Identified individuals (42 Tursiops truncatus and 14 Delphinus delphis) and stable mortality rates, support the assessment of stable populations, at least of the former.

Although a significant amount of data has been collected, we are still far from true and meaningful science-based conservation, much dependent on the Israeli coastline being only 200 km long, while cetaceans' home range is known to be much wider. Individuals of species sighted in Israel are prominent in their tendency to ignore political borders and to demonstrate cross-border home ranges (e.g., the Monachus monachus in the north and D. delphis in the south borders of Israel). The T. truncatus population is stable in size yet 'open' in composition. Activities like fishing, marine pollution, shipping, and seismic surveys, all posing a significant threat to marine mammals in the Basin, also have a cross-border impact. Collaboration between neighboring countries is therefore essential for efficient marine mammal conservation, yet for Israel and its neighbors such collaboration is politically challenging. Some creative solutions involving international go-betweens are urgently called for to ensure effective conservation of marine mammal populations in the Levant.

Prof. h. c. Dr. Ursula Siebert studied veterinary medicine at the Justus-Liebig-University Giessen (JLU) (Germany) and the Ecole National Vétérinaire de Nantes (France). She conducted her PhD in Ecotoxicology at the Free University of Brussels (Belgium) and the JLU and specialist in pathology and aquaculture. She was leader for the research group for marine mammals and sea birds at the Research and Technology Center Westcoast, Christian-Albrechts-University (CAU) of Kiel (Germany) and worked many years as consulting veterinarian responsible for harbour porpoises and seals at the Fjord&Bælt (Denmark). She habilitated in the field of zoology on anthropogenic effects on marine mammals at the CAU. Since 2011 she is the director and professor of the newly founded Institute for Terrestrial and Aquatic Wildlife Research (ITAW) at the University of Veterinary Medicine which has reached 60-80 team members today. The work of the ITAW is characterized by interdisciplinary and international research. Third party funded projects with a volume of 35 million Euros have been raised over the last years. She is Diplomate of the European College of Zoological Medicine – Wildlife Population Health and Diplomate of the European College of Aquatic Animal Health and is honory professor at the Aarhus University Denmark since 2014. She has published more than 325 peer-reviewed scientific papers. Teaching at the university and training of the next generation scientists and wildlife specialists is very important to her and she supervised more than 65 national and international PhDs/dissertations. Dissemination and outreach of the research results to the public and especially schools have become a matter of the heart to her.

Research on marine mammals in European waters has made impressive progress over the last years. National and international programs have been started and international guidelines agreed on. This is for example the case for abundance estimates, acoustic investigations, stranding networks, life history and health investigations. While in some countries data have been collected over three and more decades, in other areas infrastructure and know-how has been established over the last years only because of funding restrictions.

At the same time, the pressure by anthropogenic activities is increasing and their effects are becoming more complex. The increase of offshore windfarms driven by the wish to increase renewable energies have the potential to cause behavioural changes, habitat loss and health impacts. Large amounts of ammunition from the Second World War impact the hearing ability of marine mammals in case of explosions but are also have the potential to increase chemical pollution through corrosion of the material after 70 years in the sea. Activities such as fisheries, shipping and chemical pollution need to be assessed on international level.

Agreements such as ASCOBANS, ACCOBAMS, OSPAR, HELCOM, Natura 2000 and MSFD oblige the member states, resulting in national and international obligations for the protection and preservation of marine mammals. But in order to approach the concept of load/burden limits of those very mobile marine species we need interdisciplinary and international approaches. Funding should be secured on international level and permitted according to the speed of increasing anthropogenic activities. Thus, decisions on the protection, habitat and health preservation of marine mammals in European waters, but also elsewhere, need to be achieved with the best international data and knowledge.

Peter T. Madsen is the director of the marine bioacoustics lab at Aarhus University where he leads a group of about 20 students and post docs. He is a sensory physiologist with a research focus on how marine mammals use sound to communicate, navigate and forage under natural and disturbed conditions. In particular, he is very interested in understanding how echolocating toothed whales use their active sensory system to find and capture prey, and how that process is affected by anthropogenic noise. He is also using biologging technology to understand how marine mammals spend and acquire energy in the wild, and how this energy balance may be offset in the Anthropocene oceans with implications for their fitness. He strives to do hypothesis-driven research in a biophysical framework to allow for quantification of marine mammal performance and ecophysiology to inform future management and enable mitigation of human encroachment in the marine environment.

While some marine mammal populations give us hope by their surprisingly speedy recoveries from past human exploitations, others are sadly going extinct in plain sight. In a few cases, we absolutely know what the problem is, but we may or may not be able to fix it for political reasons. In most cases, however, dwindling population numbers are due to a complex multifactorial mixture of habitat destruction, fishing, by-catch, toxic loads and disturbance that is a much harder problem to understand and quantify in order to enable informed political action to mitigate it. The scientific disentanglement of this problem is often further compounded by the interplay with a mixture of natural stressors such as climate change, parasites, predators and shifting prey availability that may be equally hard to measure at sea. The classic approaches to assess marine mammal population dynamics are visual or acoustic surveys and mark-recapture studies, but these methods do not allow us to say why population declines are happening. In the last decade, the rapid development of new biologging and drone technology has increasingly allowed us to gather detailed information about the behavior, ecology and physiology of wild marine mammals in the face of human encroachment. But such field studies are inherently limited by the fact that only a small fraction of a population can be studied this way with a potential bias towards the slow, the old and the naive individuals.  To potentially alleviate that problem, advanced modelling is increasingly used to get at population consequences of human encroachment by propagating a suite of input parameters to translate the fitness of individuals into the fitness of populations in a changing world. The efficacy of that approach, in turn, is critically dependent on knowing what indeed those relevant parameters are for wild animals, to avoid those broad-scale inferences, and hence the critical use of finite conservation resources is essentially based on best guesses at the modellers’ desk. In this talk, I will discuss examples of things we can measure at sea as opposed to things that we really ought to measure at sea to understand the drivers of marine mammal fitness in the Anthropocene. I will use that discussion to call for a much closer collaborative relationship between field biologists and modelers to ensure that we both measure and model the right parameters to turn correlation into causality to ensure the long-term survival of healthy marine mammal populations.